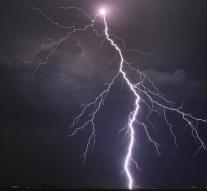 - "Also, lightning can break a world record. The World Meteorological Organization (WMO) reports that two lightnings have broken a world record. In 2007, a lightning in the US Oklahoma traveled a distance of 321 kilometers. In 2012 there was a thunderbolt in southern France measured which took 7.74 seconds over his electric discharge."

"The adoption follows an analysis of historical lightning data. It is the first time that the extreme \"hot events\" are recorded in the official records of the WMO. It listed records about heat, cold, wind, rain and other meteorological events."