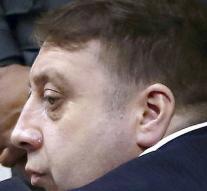 santiago - The Chilean Supreme Court has given a man a punishment that removed his partner's eyes. According to the BBC, the verdict led to enormous commotion in the South American country, where last year a lot of fuss was raised about the extreme violence against the victim.

The court ruled that it was not proven that Mauricio Ortega tried to kill his partner when he attacked her. The man hit the woman until she was unconscious, pulled her eyes off her head and left her in the street. The judge initially filed the man for 26 years, but the imprisonment is now shortened to 18 years.

Minister Claudia Pascual responded disappointed to the verdict that could no longer be challenged. She said to respect the judgment of the court but did not agree. On social media, many Chileans showed their horror about the man being punished. Also, angry women's sympathizers argued outside the court on Tuesday.

The victim stated during the trial that she had been terrorized by her partner, who said she had little reason to go through the ribbon. 'He said I was a whore. Sometimes he pulled me down the stairs. 'Ortega's lawyer had argued that it would have been easier for him to kill the woman.

The find of the bloody victim, who had been left behind, had fallen under cover, led to national protests last year. Shocked neighbors held a demonstration calling for 'respect and justice.' The action was followed later in other places in Chile.