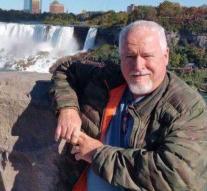 toronto - Homosexual serial killer Bruce McArthur, who chose his victims from men in a neighborhood in Toronto where mostly gay people live, Gay Village, has been sentenced to life imprisonment. The now 67...

The police raided the home of McArthur early last year. There a young man was found strapped to a bed, but it was still unharmed. During the investigation into the murders, dozens of places where McArthur did garden excavations were looking for mortal remains.

McArthur has finally known. He can ask for conditional release when he is 91-years old. Canadian media assume that he will no longer be released.