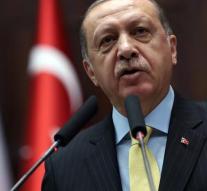 mugla - A Turkish court in Mugla has imposed several soldiers a lifelong cell punishment because they would have planned to kill President Erdogan. They wanted to kill the president during the coup, last year on July 15th.

In total there are about 40 soldiers right because of the plot. Mugla is not far from the luxury hotel where Erdogan and his family escaped the campers in 2016. The soldiers stormed the hotel during the night of the uprising.

The process against the military began in February.