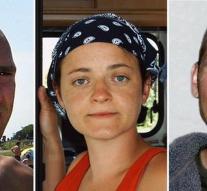 munich - The German Public Prosecutor's Office has been claiming for a long time against Beate Zschäpe, who would have been involved in racist murders as a member of the National Socialist Underground (NSU). The 42-year-old woman denied having previously participated in the atrocities, but has indicated to feel guilty because she did not prevent the murders.

The OM reiterates Zschäpe with the now-deceased Uwe Mundlos and Uwe Böhnhardt killed ten people: one of the agents and nine persons of foreign origin. The woman is also suspected of involvement in two bomb attacks and various robberies. Mundlos and Böhnhardt committed suicide in 2011.

A prosecutor described NSU's crimes rather than the 'most violent and most infamous' terrorist attacks since that of the extremist Rote Armee Fraktion (RAF). 'The motive for these crimes is an extreme right ideology aimed at a' foreigner-free 'land'.