Home / World / Life might be possible on Saturn moon 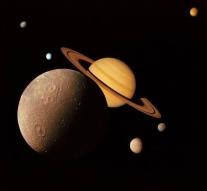 washington - Life would sometimes be possible on one of the moons of the planet Saturn. These scientists found a food source for life on the moon Enceladus. And in Europe, a moon of Jupiter, the conditions for life could also be beneficial, researchers at the US space agency NASA said on Thursday.

Enceladus is one of the 65 moons of Saturn. Under the icy surface is to be a big ocean, scientists already knew. But look at the bottom of these hot springs. Such hydrothermal vents are places where minerals from deep in the sea squirt underground. On Earth is crawling because of the minimal life. Such microbes feed on the minerals and are themselves food for another. Enceladus is possibly true.

The evidence for hot springs are found with the European-American satellite Cassini. Who flew in October 2015 through a gas cloud that came from the surface of Enceladus. Since hydrogen was in, and the most logical explanation is that coming from the hot springs.

Direct evidence for extraterrestrial life is not there, the investigators from NASA. 'We have never been so close to finding a place with the ingredients for a livable environment,' said NASA researcher Thomas Zurbuchen. Fellow Hunter Waite adds: 'Although we can detect no life, we found a food source for them. It is a candy store for microbes. '

Simultaneously made NASA announced that the Hubble Space Telescope last year has seen a major gaspluim in Europe, one of the 67 moons of the planet Jupiter. The cloud came to about 100 kilometers altitude. The exact source is still unknown, but it comes from an exceptionally hot area on the moon. Seen there are cracks in the icy surface. That means that perhaps there is a hot spring. If so, could there possibly be alive.

NASA wants to five years with a satellite and a lander to the moon Europa. That can bring more clarity.