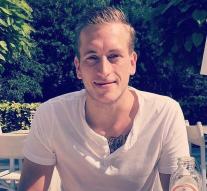 pangyo - Nice, an adventure abroad. But what if you threaten a temporary neighbor with a nuclear war? Mark Balneger, 27, has a company in South Korea, and is not going to sell Kim Jong-un but remains threatened.

The young sports fan received a stock of 10,000 euros to start a company with his mate Sven den Otter 'to make South Korea healthier' and lives for a couple of years now. 'You can see that the tone really changes,' Balneger points to Kim Jong-un's latest stunt. 'First, the South Koreans just lived when the north again made something strange. Everyone left the north to the left because it is always the same song. But now it's really different. People ask about evacuations and what happens to their retirement. '

Even Balneger is not afraid. 'I live in Pangyo with my Korean / American girlfriend, just south of Seoul. If something happens then I'm pretty safe here, and I would have enough time to go further south. '

But he also does not escape to sometimes come into the capital, which is so threatened by the neighbors. 'I'm often in Seoul for business. But yes, what should I do? Life goes on. I'd rather be busy about my business than Kim Jong-un and Trump. If something happens, we'll see it again. Until then, I just keep doing my thing. '