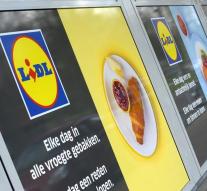 - Supermarket giant Lidl, according to German media three months extorted by two criminals. The pair from Gelsenkirchen threatened with bombs and received more than a million of Europe's largest grocer.

Wednesday the duo of 48 (men) and was 54 years (female) was arrested by police in the Ruhr area. In mid-April they had the machine for empty bottles in Recklinghausen, fifty kilometers from the Dutch border, a bomb deposited. When it was detonated remotely touched a Lidl employee injured.

Next, a letter was delivered to the supermarket group. It demanded the perpetrators of money. To prevent a new explosion was paid, according to newspaper Bild. According broadcaster WDR she wanted to pay in Spain as their holiday home.


Lidl paid the requested sum of prepaid cards for mobile phones. But the police were German, Bonny and Clyde 'simultaneously on the heels, chased them and she could pick up yesterday.