Home / World / Libyans save hundreds of people from the sea 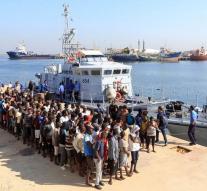 tripoli - The Libyan Coast Guard rescued 454 people at the capital Tripoli from the sea. It was about migrants from eg Egypt, Morocco and Tunisia.

The Coast Guard stressed that the operation was intended to reduce the exodus of people from the Middle East and Africa. It was about the interception of three groups. The first of 140 people was rescued Tuesday morning. The second group counted 164 people, the third 150.

The Libyan coast has been the starting point for a crossing of the Mediterranean Sea for hundreds of thousands of people in recent years. In most cases, Italy was the goal. On Monday, four involved European countries and three African, including Libya, agreed to minimize this human flow.