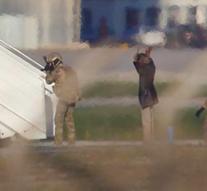 valletta - The two hijackers of a Libyan passenger plane last Friday had landed in Malta, kidnapping, made the use of force in a plane and cracking dependents. Both men declared Sunday before the court in the Maltese capital Valletta not guilty. If they are convicted they can get life for kidnapping.

The two men forced Friday the crew of the aircraft Afriqiyah Airways-fly on a domestic flight in Libya to Malta. There were hours of negotiations and the two hijackers let go all passengers and surrendered himself.

The hijackers have according to police sources so far said anything about their motives, according to the Times of Malta. To date, Libya has made no request for extradition and the men also sought political asylum in Malta.

Everything indicates that the hijackers supporters of the ousted and killed dictator Muammar Gaddafi are because they showed a fluttering Libyan flag of his time.