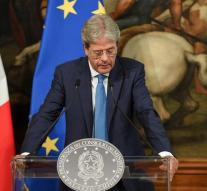 Gentiloni spoke to the Libyan Prime Minister Fayez al-Sarraj in Rome. That was a day after a conditional ceasefire had been agreed in Paris, and possible elections next year, with the commanding commander Khalifa Haftar in eastern Libya. Gentiloni added that the support, if Parliament agrees, is 'necessary' and 'carried out in Libyan waters by naval ships from Italy'.

Human traffickers operating illegally from Libya have already smuggled hundreds of thousands of migrants across Italy to Italy since 2014.