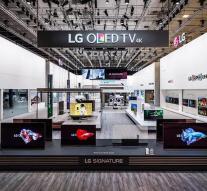 berlin - It seems that LG will reveal the V30 next month. The South Korean electronics company announced an event at the IFA IFA in Berlin before August 31st. The V30 smartphone must be the new LG flagship.

The smartphone manufacturer sent invitations with the text 'save the date'. More details are not given, but according to The Verge, it is likely that the V30 will be announced. In recent times, various rumors have been published about the mobile phone online. LG also said that in 2017 a new smartphone in the V series would appear.

It is still unclear whether the V30 is available in the Netherlands.