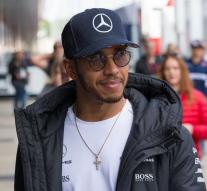 - Lewis Hamilton launched his own app on the World Emoji Day, the Hamoji. The Hamoji app works on both iOS and Android.

The official app of the triple world champion Formula 1 gives access to more than 250 new and exclusive emoji, stickers and expressions. The app has been developed in collaboration with the Cliq Digital created in Amsterdam.

The emoji's are all manually chosen by Lewis Hamilton himself and further developed by Cliq Digital, which was previously the basis of, among other things, the app of rapper Lil 'Kleine. The emoji can be easily shared via the Hamoji keyboard that works in iMessage and all other chat apps (like WhatsApp, Snapchat, Facebook, and Twitter).

IPhone users have access to Hamoji stickers that can be added to iMessage. Lewis Hamilton: 'I use daily emoji to communicate. It was obviously nice to be able to assemble my own package. I'm more than happy with the end result and hope that users will enjoy as much fun as possible to Hamoji's! '