Home / World / 'Let FBI release all the facts about e-mails' 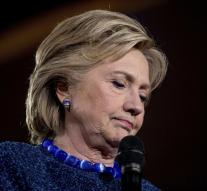 - Democratic presidential candidate Hillary Clinton on Friday (local time) called the FBI to release all the newly found information about her controversial use a personal email server. Earlier in the day announced FBI chief James Comey in the investigation concluded in July for the messages to reopen the Democrats sent as foreign minister from a private server.

Clinton confident that will not come back to the federal investigation service to its decision not to prosecute the presidential candidate for the e-mail scandal, she told reporters Friday.

The research focuses on e-mails sent or received by a device that Clinton staff member Huma Abedin shared with Anthony Weiner, her ex-husband. This former Congressman became discredited by sending sexually explicit photos to women. The FBI is now investigating allegations that Weiner sent explicit messages to a fifteen year old girl from North Carolina.

The development represents a significant setback for Clinton, who on November 8, hoping to beat her Republican opponent Donald Trump in the US presidential election. Trump responded Friday during a campaign rally in Maine with familiar bombastic tone on the news: ' This is the biggest scandal since Watergate. 'Watergate is the name of the eavesdropping scandal that eventually led to the resignation of President Richard Nixon in 1974, is unique in US history.