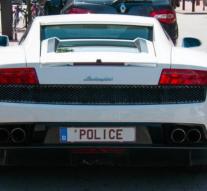 brussels - Belgians often request a personalized license plate at the Vehicle Registration Service (DIV). Since the price for a license plate with texts like Guy01 or Animal has risen from one thousand to two thousand euros, the number of applications dropped from almost six thousand in 2015 to almost 1800 in 2016.

In December 2015, the price doubled, but the price change is bad for the treasury, now appears. Revenues dropped from 6.1 million euros in 2015 to 3.3 million euros last year. That is why Minister of Mobility François Bellot called for a price reduction.