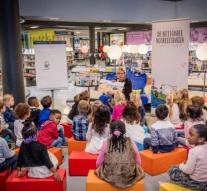 the hague - Ever fewer people go to the library to borrow a book. The number of borrowed books decreased by more than half compared with the late 1980s. For example, e-books, digital books that you read with an e-reader are becoming more popular. In 2016, 2.8 million e-books were borrowed from the public library, 74 percent more than the year before.

The number of loaned paper books has decreased by 100 million in almost three decades. The Central Bureau of Statistics (CBS) and the Royal Library add that 'changes in the way we spend our free time. Reading media has lost popularity since the early 1990s, and the use of computer and internet increased. ''

The decrease in the number of loans is greatest among books for adults, but also for youth books is less demand. However, since 2005, the number of youth members has increased again, partly due to the free membership of young people and campaigns like BoekStart, which encourages parents to read their young children.

Last year, 156 public libraries had 3.7 million members, just slightly less than in 2015. A total of 344,000 members had a user account for the online library in their subscription. Six out of ten members actually made use of it.