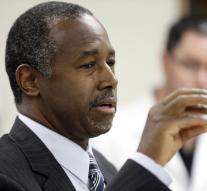 - The Holocaust in the Second World War had far fewer casualties claimed as the Jews had guns . That claimed the Republican Ben Carson , who wants to make a bid for the presidency of the United States

Carson, staunch supporter of freedom of gun ownership, revealed his concoction in an interview with CNN. Earlier, the Republican preached a similar position after the bloody shooting at the school in Roseburg. A gunman killed over there a week ago nine people and committed suicide.