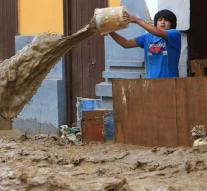 munich - Nature kept itself relatively cool in the first half of this year. The worldwide damage caused by natural violence was considerably less than a year earlier. The number of fatal casualties has so far fallen.

Total damage caused by storms, floods and earthquakes came to 41 billion dollars in the first six months of the year, compared to 111 billion dollars a year earlier, according to figures from German reinsurers Munich Re. The ten-year average is 102 billion dollars.

About half of the damage was insured, which meant that insurers had to pull the wallet more often. This is a larger part than usual, and this is mainly due to a series of severe storms in the United States, where many individuals and businesses are insured.

With 3.1 billion dollars of damage, 90 percent of which were uninsured, a series of floods and landslides after heavy rainfall in Peru was the most expensive natural disaster in 2017. 113 people died.