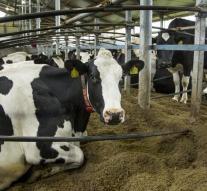 the hague - Reducing the livestock sheds off its benefits. The pollutant in manure is found much less, which makes the Netherlands already under the Brussels standard. The cabinet warns that the booty is not yet in place: farmers must continue this line, otherwise there will be a risk of a further reduction in the number of cows.

In the first half of this year, the so-called phosphate production, a fertilizer substance, fell by 8.3 million kilograms in dairy farming. This is evidenced by new measurements. This decrease is mainly because the number of cows in this sector has decreased by 160,000 after the Cabinet's intervention, almost 10 percent of the total.

Secretary of State of Dam (Economic Affairs) is very pleased with the result. With these reports, the Netherlands remains within the standards set by Brussels. And a reduction of phosphate production is also better for the environment, he says.

For the Netherlands it is important to stay under the European standard. This is mainly due to the punishment that would follow if the norm is not met. Our country has been given an exceptional position from the EU. Dutch farmers can spread more manure across the country than their foreign colleagues, our many grassland takes up the substances well. That exception, in jargon waiver, threatened to be lost as a punishment. If that were to happen, farmers would have a manure surplus because they could drive less manure across the country. For many, then a forced reduction in the number of cows would be the only solution because otherwise the manure loss of the manure is difficult and expensive. In short: the number of cows has been reduced in the past six months to prevent further deterioration.

Van Dam is farming with these results in Brussels. He hopes, with these half-year figures, can re-establish the exceptional position. However, there may be some mistakes for the Secretary of State. A group of farmers has been given the free hand of the judge. If they choose to expand their livestock again, then the Netherlands can still be above the Brussels standard. 'Then the whole sector is hit,' says Van Dam about the imminent fine of loss of the derogation. The cost of the loss of this preferred position for the Netherlands has previously been estimated at approximately 100 million euros.