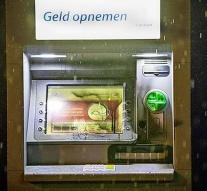 amsterdam - Surprisingly, the number of explosive creaks has been greatly reduced. Since the beginning of January, 'only' 38 ATMs have been blown: forty percent less than in the six months before.

That is what the Dutch Association of Banks (NVB) reports to The Telegraph after a request for figures.

The analysis of a half-year explosion jaws can be summarized in one sentence: less, but much heavier. In 95 percent of the crash criminals, the criminals used explosives to access banknotes in ATMs.

Over the years, roughly half of the crackers used gas to blow up the blast. The use of explosives as semtex causes much more damage and danger to the environment. After technical adjustments to the bulk of the ATMs, the gas method was no longer possible. Criminals therefore resorted to heavy explosives.

Yvonne Willemsen, head of security affairs of the Dutch Association of Banks, is cautiously optimistic about the sharp decline in the number of explosives. 'With emphasis on caution. Because we often see fluctuations and sometimes the explosive crackers turn out to be something new, which can change the image again. It is good to see that certain methods, such as those with gas, are no longer used. Then our resources have worked well. '

Since the middle of last year, the banks have taken all kinds of measures. For example, dozens of vending machines have been closed in occupied buildings, overseeing banks at night security officers, additional cameras placed, and reinforced safes make cracking more difficult.

By means of special 'dna ink', released by a failed or partially failed explosion crack, the police can find out which machine comes from a ticket. For example, it is possible to connect multiple crash crabs to perpetrators if 'contaminated' bills or clothing are found. What the spoil has been with the 38 explosives so far this year, the Dutch Association of Banks does not want to say.