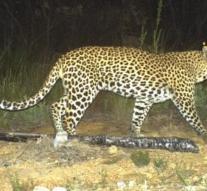 kathmandu - The Nepalese capital Kathmandu airport has been recently closed Monday as a feline animal roamed around on the runway. One pilot said it was a leopard.

Nepalese media, however, did not exclude that the pilot had seen a big cat. Approximately fifty people are summoned to catch the animal. After signaling the predator airport was closed for about half an hour. Then the airport was reopened.

According to the Kathmandu Post newspaper came after seeing the suspected leopard chaos at the airport. Especially among foreign backpackers was panic.

Nepal Most leopards live in nature reserves in the north and south of the country. Lately they dive more often in urban areas, as more people settle in the habitat of predators.