Home / World / Leonard Cohen deceased at the age of 82 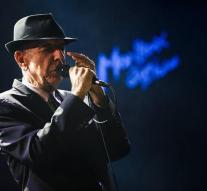 - The Canadian poet, songwriter and artist Leonard Cohen is deceased at the age of 82. That made his Facebook page in the night from Thursday to Friday.

Cohen was in the 60s famous with his songs Suzanne, So Long Marianne and Bird on a Wire. He is also known for the song Hallelujah. Initially he started as a poet, with his monotonous, melancholy voice he had as a musician more successful.

' With deep sadness we announce that legendary poet, songwriter and artist, Leonard Cohen is deceased, '' it says on the site of Cohen which occurred even in the Netherlands in 2013. The family is asking for privacy.

He now lived in Los Angeles and struggled for a while with his health.

Cohen was born in Montreal in 1934 and in 1967 he settled in the United States and he started writing songs for others. When singer Judy Collins had great success with his song Suzanne, Cohen himself decided to play his songs. In 1967 his first album was released.