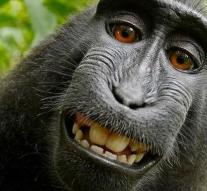 PETA was brought to court on behalf of the monkey Naruto, who took pictures of himself in the Indonesian jungle with Slater's camera in 2011. It meant the escalation of a legal battle on whether a monkey could have copyrights. The judge ruled last year that this was not the case, after which the animal protection officers went to appeal.

The case is now coming to an end. Slater and PETA say in a joint statement that a quarter of the proceeds from the apenselfies are donated to organizations that deal with monkey welfare. According to American media, it is unclear how much money is exactly.

See also: 'Monkey must get money for selfie'