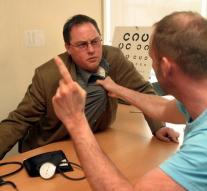 brussels - Nearly four in ten Belgian doctors have become victims of aggression and violence by patients last year. Views over their entire career are happening at almost 85 percent. Female and young doctors are relatively more targeted.

Research by the Vrije Universiteit Brussel has revealed that. In most cases it was verbal and psychological violence, but physical violence (more than 14 percent) and sexual violence (almost 10 percent) occurred regularly.

Psychiatric institutions are at the highest risk, and emergency departments in hospitals. Doctors who work out of the hospital regularly encountered problems more often than their colleagues who are busy.

The expectation is that aggression and violence against doctors will continue to increase as the percentage of female doctors grows. For the research, 3726 doctors filled out questionnaires.