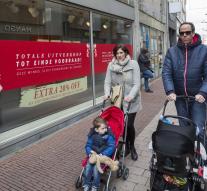 utrecht - The vacancy of retailers has fallen slightly in recent years, but in many medium-sized municipalities with 50,000 to 100,000 inhabitants there is nothing to notice.

On average, one out of eight stores in the center is empty, so Dynamis Real Estate Consultants finds in an annual survey of the Dutch retail market.

In about half of these places, vacancy rates continued to increase.

Drawing for the vacancy in medium-sized places are former V \u0026 D buildings. In the major cities or 'main shopping areas', they all have a new destination, but in so-called 'supportive shopping areas' in slightly smaller cities, 72 percent are still empty.

Overall, vacancy rates fell to 7.4 percent. A year earlier, almost 1 percent was still empty. According to the authors of the report, medium-sized sites would be well placed to reduce the supply of goods.

Due to the strong increase in internet sales, their regional function has decreased.