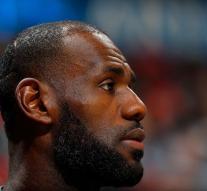 cleveland - NBA champion LeBron James does not have a good word to say about the misogynistic utterances Donald Trump. The famous basketball player of the Cleveland Cavaliers criticized in a television interview from his club 'locker room talk' of Republican presidential candidate. He said that before or after a game conversations are about the game, the tactics of the adversary.

' In our locker room we show in any way disrespect for women. What has called this guy is dredging '' said James, who does not like Trump or his drivel ' '. The star player from Ohio said last week to be a follower of Hillary Clinton. ' A champion for children and their future. ''

Another sports icon, American footballer Tom Brady, responded quite differently. When the quarterback of the New England Patriots Wednesday was asked how he would feel if his offspring was confronted with Trump's locker room talk, he smiled very uncomfortable. ' Thanks guys, a nice day, '' Brady said, and made his escape. In his locker a hat earlier this year found that read 'Make America Great Again.'