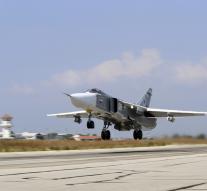 - Lebanon will not take into account any exercise of the Russian Navy. Moscow asked Lebanon to allow passenger flights during exercise three days by other routes to fly, but Beirut has rejected it.

It is the airspace over the Mediterranean. Lebanon has limited flight paths because it does not fly over neighboring Israel and Syria. Changing the routes are according to the Minister of Transport " against the interest " Lebanon.