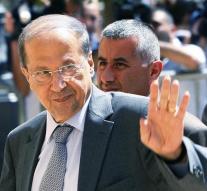 - After nearly 2.5 years of wrangling Lebanon finally has a new president. Former army chief Michel Aoun received enough votes from the different blocs in parliament Monday and was immediately sworn in as the new head of state.

The political system in Lebanon is divided along sectarian lines. The presidency is reserved for a Christian, something the 81-year-old Aoun. When it appeared that the country had a new president, fireworks were fired in the capital Beirut.

The new president promised to bind to the fight with terrorism. Aoun also wants to prevent regional ' fires' spread to his country, which include borders Syria.

Aoun also spoke out about the approximately 1.5 million Syrian refugees have sought refuge in Lebanon. According to the president must return the Syrians are part of a possible solution to the bloody conflict in their country.