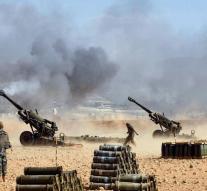 beirut - The Lebanese army started an offensive against an enclave governed by Islamic State, located in northeastern Lebanon at the border with Syria on Saturday.

Helicopters, missiles and artillery attacks were performed on positions of IS, near the village of Ras Baalbek. It is the last piece of terrain in the border area still in the hands of IS.

Shortly after the attack, the Shiite militia also made Hezbollah known via TV channel al-Manar together with the Syrian army to conduct operations against IS in the border area.

According to the Lebanese army, it is not a joint operation with Syrian troops. The army wants to hunt the IS fighters out of Lebanon. There would be about five hundred IS warriors in the mountainous border area.