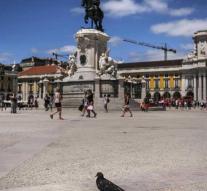 lisbon - The great heat in Portugal creates unusual scenes in public life. In the streets of the capital Lisbon, but also in other places, this weekend was almost deserted on the streets. Temperatures in many places between 44 and 47 degrees meant that the Portuguese sought protection from the heat.

An exception was the beaches. Those were Saturday and Sunday full of people looking for a bit of cooling.

Scattered over the land there have been dozens of fires for three days. One of the largest fires rages in mountainous areas near Monchique on the north side of the Algarve, which is popular with tourists. The Lusa news agency reported that seven hundred firefighters and two hundred fire engines and an unknown number of helicopters have been deployed there.

Due to the strong wind and the high temperatures, the extinguishing work is difficult. According to the Portuguese newspaper Publico about thirty fires spread throughout Portugal. To combat this, 1600 firefighters, an unknown number of fire engines and around twenty firefighting aircraft were deployed.

In the summer of 2017, 64 people were killed in forest fires in Portugal.