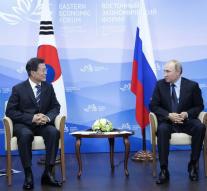 tokyo - According to Japanese Prime Minister Shinzo Abe, North Korea must understand that it does not have a 'rosy future' if the country does not change course. The Prime Minister wants to discuss the situation on the Korean peninsula in Vladivostok this week with the South Korean President Moon Jae-in and Russian President Vladimir Putin.

In the Russian city there is currently an economic forum, where Putin and Moon spoke to each other. The leader of South Korea said that the situation could be unpredictable if North Korea did not stop provoking.

Russia has indicated its willingness to support a new United States resolution on North Korea, provided that military tensions do not escalate and it is aimed at finding a diplomatic solution.