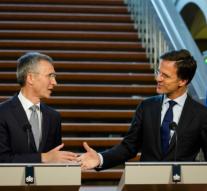 warsaw - The leaders of the 28 NATO member states will meet Friday and Saturday in Warsaw. In taking the national stadium of Poland they decide to give an answer to the threats coming from the east and south of Europe.

So is committed to a multinational force of 4,000 men to Poland and to send the Baltic states, in response to Russian aggression in Ukraine. The fight against Islamic State and support to countries in the Middle East and North Africa are also high on the agenda, as well as the prevention of migration, cooperation with the European Union and the level of national defense budgets.

At the biannual summit of the military alliance to give 18 presidents, 21 heads of government and 80 ministers before the public, including US President Barack Obama. On behalf of the Netherlands, Prime Minister Mark Rutte and the Ministers Jeanine Hennis-Plasschaert (Defence) and Bert Koenders (Foreign Affairs) was present.