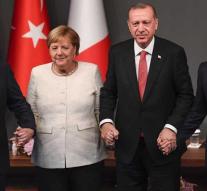 istanbul - The leaders of Russia, Turkey, France and Germany have met in Istanbul about the future of Syria. They want to smooth the peace process again. A committee that has to work on a new constitution for the country must, according to a joint statement, start working in Geneva before the end of the year.

The civil war in Syria seems to be decided after seven years in favor of the Assad regime. Insurgents fighting against the government only have a big stronghold in and around Idlib. Syrian Kurds also have a large share of the country, but they do not actively fight the government army.