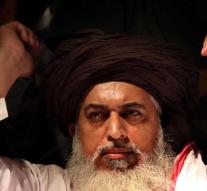 lahore - Pakistan is going to prosecute four prominent members of the radical Islamic party Tehreek-e-Labbaik (TLP) for treason and terrorism. After the Christian Asia Bibi was acquitted for blasphemy, the party organized protests that resulted in violence. The party leadership called for the murder of the chief executives and put soldiers to mutinies.

According to al-Jazeera, party leader Khadim Hussain Rizvi belongs to the accused. If they are found guilty, they have a chance of life imprisonment.