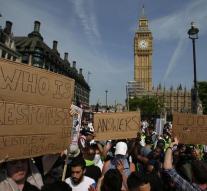 london - The head of the London suburb of Kensington and Chelsea, Nicholas Holgate, has resigned. He was under pressure after the fire in a tower surface, the Grenfell Tower, like the entire city council. Holgate said to British media on Thursday that he had preferred to work through, but the government of Prime Minister Theresa May has called for his departure.

The apartment building with more than 120 relatively cheap apartments was on June 14 in a short period of time. At least 79 people died in the fire. It was the deadliest fire in London for over seventy years.

The suburbs in a chic part of West London are accused of not responding to the fire and have not or did not use sufficient efforts to prevent such a fire. The May government is also under threat because its spending policy would lead to unsafe situations. British Finance Minister Philip Hammond refuted that Thursday at SkyNews.