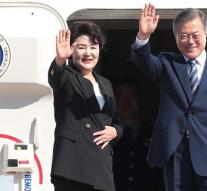 According to a senior official, Moon wants to break the deadlock in negotiations between North Korea and the United States. Trump and Kim made general agreements about denuclearization in Singapore earlier this year, but the elaboration of this was very difficult in the months after the summit.

The South Korean leader has emerged as a mediator in the conflict over the North Korean nuclear program. He told Thursday after his recent three-day visit to the isolated neighbor that Kim wants to get back with Trump. Moon is expected to commit to this.