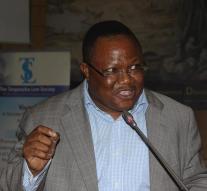 A leading member of the opposition in Tanzania, lawyer Tundu Lissu, was shot down by unknown men before his house in the capital Dodoma on Thursday.

He was taken to a hospital in a serious condition, with medical wounds in his abdomen, arm and leg, according to medical sources. The police could not say anything about the motive. The perpetrators flee.

Lissu is the group chairman of the opposition party Chadema. He is a pronounced critic of the government of President John Magufuli and was repeatedly arrested on suspicion of uproar. The last time was in July after he called Magufuli a dictator.

Magufuli showed up in a Twitter message with Lissu. He spoke of a 'barbaric act' and prayed for the restoration of the parliamentarian.

Amnesty International said the 'cowardly attack' concerns the safety of all the different voices in the country, 'in a time when the space for deviant opinions is rapidly slipping'. The human rights organization called on the authorities on the people and the world to reassure that this shooting was not politically motivated. '