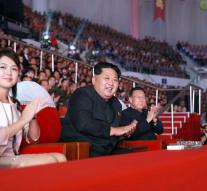 North Korea has not confirmed the birth of a baby. Nothing is known about the gender and the name of the possible offspring. Kim and his wife Ri already had two children born in 2010 and 2013. The second child would be a girl, nothing about the gender of the first child is known.

The theme is important for the Koreans on both sides of the border. With a son, the ruling family would have a potential tribal parent. In North Korea, the Kim family has been in power for over 60 years.