Home / World / Leader Iran prohibits talks with the US 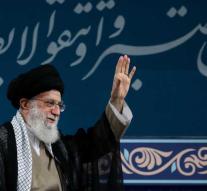 teheran - The highest spiritual leader of Iran, the Ayatollah Ali Khamenei, has, according to state television, prohibited all direct talks with the United States. He rejects an offer from US President Trump last month. The White House suggested conversations without preconditions.

'I forbid the keeping of conversations with America. America never keeps its promises in conversations. Speaks only empty words ', the television quoted the Iranian Supreme Leader.

The United States unilaterally announced earlier this year the nuclear deal that closed the West and Russia with the country to prevent Tehran from developing nuclear weapons. According to Trump, it was a bad deal.