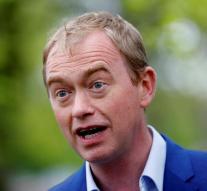 london - The leader of the British pro-EU party Liberal Democrats Tim Farron has gone up. He announced that Wednesday, reported British media.

In a statement, Farron said that he was torn between 'living as a faithful Christian and serving as a political leader.' He thinks he had a better chance of jumping with questions about his faith during the election campaign, for example, his view on homosexuality for which he was criticized from his own ranks.

Farron became the leader of the party in 2015 as successor to Nick Clegg. It took place after the then disastrous elections, with the party losing seats in parliament. In the last elections, the party won four seats.