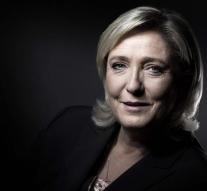 brussels - Marine Le Pen, president of the French far-right party Front National to pay 339,000 euros to the European Parliament, French news report. The European anti-fraud office, Olaf claims this amount because their employees FN wrongly put on the payroll of the parliament.

The amount relates to two employees who have performed Le Pen got paid for years as an assistant in the European Parliament, but they would primarily contracts for the party had nothing to do with it. The politician was asked for explanation, but did not respond to that. She must now repay the salaries of two between 2010 and 2016.

There is still an investigation of twenty other members of FN, which Olaf started early 2015. Le Pen made the case that time as 'political manipulation'.