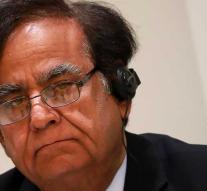 frankfurt - The lawyer of Asia Bibi wants Germany to provide Bibi with citizenship. The Catholic woman was recently acquitted of blasphemy by the Pakistani Supreme Court. She received the death penalty earlier.

Saif-ul-Mulook told a press conference in Frankfurt that Bibi and her family needed a passport to leave the country. 'If the German Chancellor tells her ambassador to give her, her husband and her two daughters a German passport, no one can stop her for one second because she is no longer Pakistani,' he added.