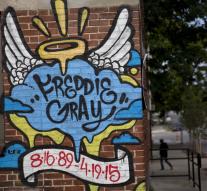 - The lawsuit over the death of the black American Freddie Gray shortly after his arrest in Baltimore, re. The judges could, after 16 hours of deliberation not agree on whether police officer William Porter is guilty of the death of Gray.

Porter is one of six officers who must appear in court for the death of the prisoner. The agent would have put Gray after his arrest in a police van without a seatbelt him to do. Nor would he have let medical aid provided to Gray. The 25-year-old prisoner was killed because he had his neck broken during transport in the police van.

The death of Gray led to major protests against police brutality in the United States. Wednesday was also protesting in Baltimore.