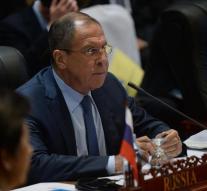 - Russian Foreign Minister Sergei Lavrov, the accusations that Russia was behind the hack of the leaked emails from the Democratic party leadership overruled. He said Tuesday ahead of a meeting with his US counterpart John Kerry in Laos.

In strong wording Lavrov denied having anything to do with the hack. The FBI is investigating computer break-in at the Democratic Party. Website Wikileaks published last week 20 000 e-mails from the Democratic National Committee who were captured by the hackers.

This showed that the Democratic party leadership tried to favor Hillary Clinton in the primaries at the expense of Bernie Sanders. Some people point the finger at Russia.