Home / World / Lavrov: murder of leader in Donbass is provocation 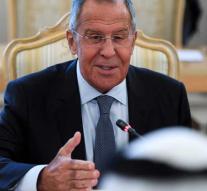 moscow - The murder of a pro-Russian separatist in the eastern Ukrainian Donbass region is a provocation that makes peace negotiations impossible. Russian Foreign Minister Sergei Lavrov said this in a reaction to the murder of the leader of the self-proclaimed republic of Donetsk, Aleksandr Zachartsjenko.

Lavrov seems to refrain from the consultation that four countries now and then have to resolve the conflicts in eastern Ukraine. These are Germany, France, Russia and Ukraine. The consultation is also called the Normandy consultation. That is because the discussion group arose on an international commemoration in June 2014 of the allied invasion of Nazi occupied Europe in Normandy (June 6, 1944).

The pro-Russian Ukrainian president Viktor Yanukovich, chosen in 2010, comes from the Donbass region. He was deported during heavy riots in February 2014 and fled to Russia. Many Ukrainians who feel closely related to Russians because of their language, culture or income, see his deposition, just like the Kremlin, as a right-wing coup. It led to separatism and war in eastern Ukraine.