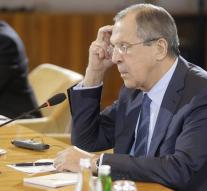 belgrade - Russian Foreign Minister Sergei Lavrov on Thursday met his Turkish counterpart Mevlut Cavusoglu. That happened in the Serbian capital Belgrade on the sidelines of a conference of the Organization for Security and Co-operation in Europe (OSCE).

Russia and Turkey are fighting a bitter quarrel, after Turkey last week a Russian fighter shot which would have violated Turkish airspace.