Home / World / Lavrov: I hope no lasting damage to US 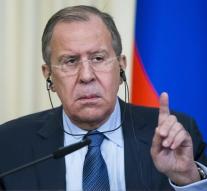 moscow - Russian Foreign Minister Sergej Lavrov hopes that the US missile attack on Syria will not irreparably harm relations between Moscow and Washington. 'This was an act of aggression based on an absolutely invented pretext,' Lavrov said Friday at a news conference in the Uzbek Tashkent.

Lavrov: 'It reminds me of the situation in 2003 when the United States and Britain attacked together with some of their allies Iraq. 'He said that Russia will ask why they carried out the attacks on Washington clarification.

'I hope this challenge will not cause irreparable damage to US-Russian relations,' said Lavrov. No known Russian soldiers were killed in the attack, he added.