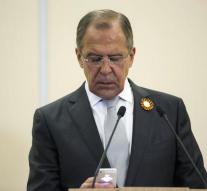 moscow - The Russian Foreign Minister, Sergei Lavrov, called his American colleague Rex Tillerson on Friday and stressed that Russia would like to cooperate with the US. Lavrov said that the two countries should normalize their relationship and work together in matters affecting the whole world.

The Kremlin is still responding to sanctions imposed by the US in the aftermath of Barack Obama's presidency following Russia's alleged interference in the US elections. In addition, the US Congress decided to impose new sanctions against Russia this month.