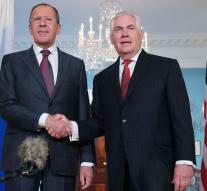 manila - According to the Russian Foreign Minister, it is still possible to enter into dialogue with its American colleagues, despite mutual tensions and new US sanctions against Russia. Sergei Lavrov said Sunday that 'America is ready to discuss complex issues.' Lavrov believes that there is no alternative.

The minister spoke his American fellow Rex Tillerson on Sunday at an international meeting in Manila. What was discussed exactly during the long-term discussion in the Philippine capital was not known.

However, Lavrov reported that the issue in Ukraine is being discussed quickly. Kurt Volker, the US Special Envoy for Ukraine, will soon speak to a neighbor of Russian President Vladimir Putin. In fact, Vladislav Soerkov draws behind the scenes in the ropes in eastern Ukraine. When the meeting between Volker and Soerkov takes place exactly, not known.