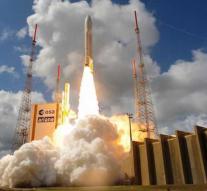 kourou - A launch of the usually reliable Ariane 5 rocket encountered problems on the night from Thursday to Friday. All contacts with the rocket are broken. This happened a few minutes after the launch from the launch site in Kourou in French Guiana.

On board of the rocket were two satellites for telecommunication. One for a company in Luxembourg and one in Abu Dhabi, both of whom can not get in touch with their satellite. It went wrong a few seconds after the top part of the rocket was disconnected. If the contact is restored, there is a chance that the satellites can still be brought into the right orbit around the earth.

It was the first launch of an Ariane 5 rocket this year. The European project had previously completed 82 successful missions in series.